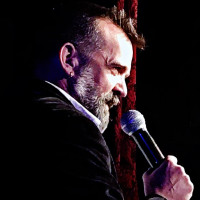 Thornton is just a master of the craft of comedy - Theatreview

Neil Thornton has made a big impact on the New Zealand comedy circuit since arriving here from New York City. In the United States, Neil was a regular in New York comedy clubs, and performed in Philadelphia, Washington D.C., Provincetown, and Fire Island.

Since arriving in New Zealand, he has toured up and down the country, entertaining audiences with his battles of understanding Kiwi culture and finding his own identity. He's a favorite at Auckland and Wellington comedy clubs, and recently appeared in the TV3 comedy special "After Hours." His fringe festival show, Ursus Americanus, was nominated for the Best Stand-Up Comedy award, and his NZ International Comedy Festival show, Bearly Kiwi, was nominated for Best Newcomer.

"I laughed until I cried and nearly got thrown out for snorting into my beer." - The Residents