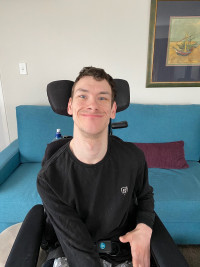 Dave moved to Australia with his family in 2008, where he studied screen and media at Tafe and won Student of the Year in his region as well as awards for 2 short films. He also won an award for innovation as he had figured out he could operate his computer via his iPad - by typing with his nose and writing comedy, scripts and editing films this way.

Dave has been living with cerebral palsy from birth  which has never held him back, but instead has and has helped him develop a cheeky sense of humour.

His passion  is for making people laugh and enlightening people that you should never judge a book by it’s  cover - and  his message  - disabled people are real people.

Dave grew up in a performing family which led him in his chosen direction of comedy. When he was at high school - he refused to go most days, so his teacher support person , would call him  in the mornings and tell him half a joke - with the promise of the punchline when he got to school. This was the only thing that worked, because he couldn't resist a joke.

Dave did a comedy course while living in Australia - being taught by the hilarious Many Nolan, and performed around the region before moving home to Wellington in 2017. Since then - performing Comedy has been his passion and he is loving being part of Comedy in NZ, despite difficulties in accessing venues in a wheelchair. His difficulties with speech doesn’t hold him back and he has a slide show that reveals the words he is saying as he is performing. Dave is one of 7 children and his family support him and assist him at his performances and are his biggest fans and worst critics.