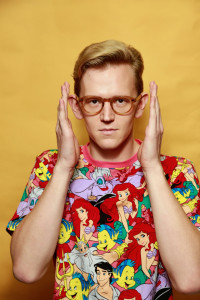 Chris Parker is an actor, comedian and writer who has worked and performed throughout the entire country.

After graduating as an actor from Toi Whakaari: New Zealand Drama School, Chris swiftly moved to Auckland where he began to gig regularly as an actor and improviser. Chris has co-written and performed in the camp cult hits Camping, D.O.C.ing and Giggly Gerties with writing partner, Thomas Sainsbury, as part of the NZ International Comedy Festival (NZICF). Chris was awarded the 2015 Best Newcomer Award for NZICF for his first solo show, No More Dancing in the Good Room, which returned as part of the 2016 Pride Festival and continued to a successful national tour.

Recently, he won the 2018 Fred Award for his latest show Camp Binch. Chris co-created the web series Bachelor Pad and Stake Out, as well as co-writing the popular Christmas shows for Basement Theatre, Auckland: Hauraki Horror and The Opening Night Before Christmas.

For Silo Theatre, Chris starred as David Halls in Hudson & Halls Live!, which won him Best Actor for the role in 2016 at the Wellington Theatre Awards.

For TVNZ, Chris created the series The Male Gayz, based off his podcast with Eli Matthewson, and hosts The Great Kiwi Bake Off: An Extra Slice. Chris currently wrote and performed for Three’s Jono and Ben, Funny Girls and 7 Days, And is a core cast member of the award-winning improv comedy show Snort.